We introduce the transfer pricing regulations in India, including master file and CbCR requirements. This article is part one of a four-part series.

Transfer pricing refers to prices of “controlled transactions” between cross-border associated enterprises (AE), which may take place under conditions differing from those taking place between independent enterprises, as intra group transactions between AEs are not subject to market considerations. It is mostly done for tax minimization, by parking funds in AEs located in tax havens.

With India’s economy opening up in 1991, its market began to attract foreign direct investment (FDI) as well as interest from multinational corporations (MNCs).

A 1991 standing committee dealing with the matter deemed existing provisions to address tax minimization through transfer pricing as insufficient.

Subsequently, in 1999, an expert group under the Central Bureau of Direct Taxes (CBDT) recommended a complete overhaul of section 92 of the Income Tax Act, 1961.

Acting on the recommendation to prevent erosion of India’s tax base, the Income Tax Act, 1961 was amended in April 2001 by substituting the existing section 92 and inserting sections 92A to 92F, to introduce Indian transfer pricing regulations (TPR), in line with Article 9 of the Organization for Economic Co-operation and Development Guidelines (OECD) guidelines on transfer pricing.

The amendment also defines international transactions, documentation requirements, and associated enterprises in a broad based and expansive manner. These regulations, which came into effect in 2002, mainly covered intra-group cross-border transactions.

From April 2013, the provisions were extended to specified domestic transactions between related enterprises.

Thus, the transfer pricing regime in India applies to both domestic and international transactions, which fall above a threshold in terms of deal value. It is regulated on the basis of section(s) 92A-F, Income Tax Act, 1961 and relevant Rule(s) 10A-E of the Income Tax Rules, 1962.

Section 92: Income to be computed with respect to arm’s-length price 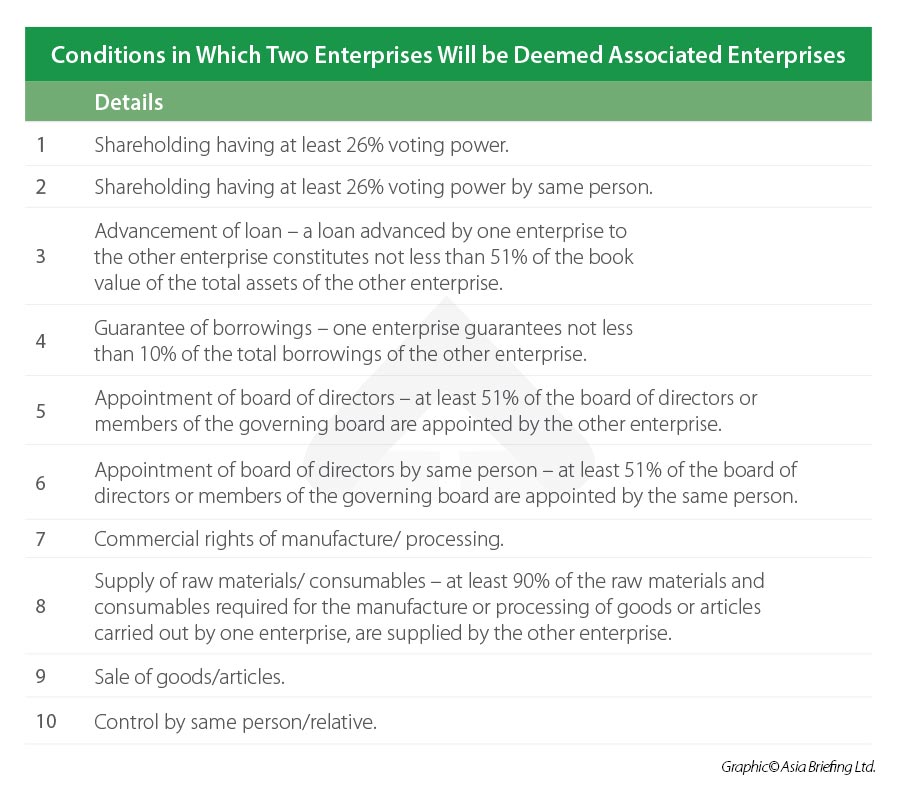 An international transaction is a transaction between two or more associated enterprises (AEs) and either or both of them are non-residents.

An international transaction can be in the nature of a purchase, sale, or lease of property or provision of services, lending or borrowing money, and any other transaction that has bearing on profits, income, losses, or assets and includes cost contribution arrangements.

Section 92B also provides that a transaction between an enterprise and an unrelated third party (whether based in India or overseas) shall be deemed to be an international transaction if there exists a prior agreement between an AE and the third party.

Furthermore, if the terms of such transactions with the unrelated party are determined by the AE, such a transaction too will be deemed as an international transaction. As a result, these transactions will also be governed by transfer pricing regulations in India.

Arm’s-length price, as defined by section 92F, means a price that is applied to transactions between persons other than AEs in uncontrolled conditions. Section 92C prescribes methods for the determination of the arm’s-length price and provides that such a price will be calculated using the most appropriate method.

Initially, five methods were prescribed for the computation of arm’s-length price:

A sixth method, termed as “Other Method”, was notified in 2012, and is prescribed in rule 10AB of the Income Tax Rules, 1962. The Other Method can be any method that considers the price which has been charged or paid, or would have been charged or paid, for the same or similar uncontrolled transaction with or between unrelated parties under similar circumstances, considering all the relevant facts.

This section provides for maintenance of documents as prescribed. This is essential to determine the arm’s-length price. Rule 10B lists the documents to be maintained. Taxpayers being a constituent entity of an international group must also maintain a record of such documents.

This section provides that an audit report from the accountant in a prescribed format needs to be furnished by the entity undertaking an international transaction or a specified domestic transaction. This report must certify the nature and amount of transaction and needs to be filed along with the income tax return. Form 3CEB must be filed for this purpose.

This section contains certain definitions relevant to computation of arm’s-length price, including that of an accountant, arm’s[1]length price, enterprise, transaction, etc.

With respect to transfer pricing, safe harbor rules refer to those legal provisions which reduce or eliminate liability of the taxpayers given certain conditions are fulfilled, as they provide for circumstances in which a certain category of taxpayers can follow a prescribed set of rules under which transfer prices are automatically accepted by the income tax authorities.

These provisions provide relief from compliance and litigation, as well as simplify the administrative process. They prescribe the eligibility criteria for taxpayers, eligible international transactions, the target operating margin, procedural aspects, timeline for audit, etc.

Until the fiscal year 2011-12, transfer pricing regulations were not applicable to domestic transactions.

The Finance Act, 2012 extended the application of transfer pricing regulations to domestic transactions, labelled ‘Specified Domestic Transactions’ by inserting section 92BA in the Income Tax Act, 1961. This amendment is applicable from FY 2012-13 and onwards.

Efforts by the OECD’s BEPS project have led to the formulation of proposals to implement “minimum standards” under respective Action Plans, including Country-by-Country Reporting (CbCR) detailed in Action 13. Globally, CbCR applies to MNCs with a combined revenue of US$890 million or more. Under the CbC reporting requirement, large MNCs have to provide an annual return, which breaks down key elements of the financial statements by jurisdiction.

India is committed to the BEPS project, including implementing Action 13. The Central Board of Direct Taxes (CBDT) has prescribed multi-layered transfer pricing documentation requirements, including rules for maintaining and furnishing the Master File and CbCR in respect of an international group.

In October 2017, the CBDT introduced new rules – Rule 10DA and Rule 10DB – to the Income Tax Rules, 1962, and new Forms were prescribed – Form CEBA to Form 3CEBE. In April 2021, these Master File and CbCR rules were further relaxed by the CBDT through amendments to the Income Tax Rules, which will be relevant to the assessment year (AY) 2021-22. The significant amendments made in Rule 10DA and Rule 10DB are shown in the table below. 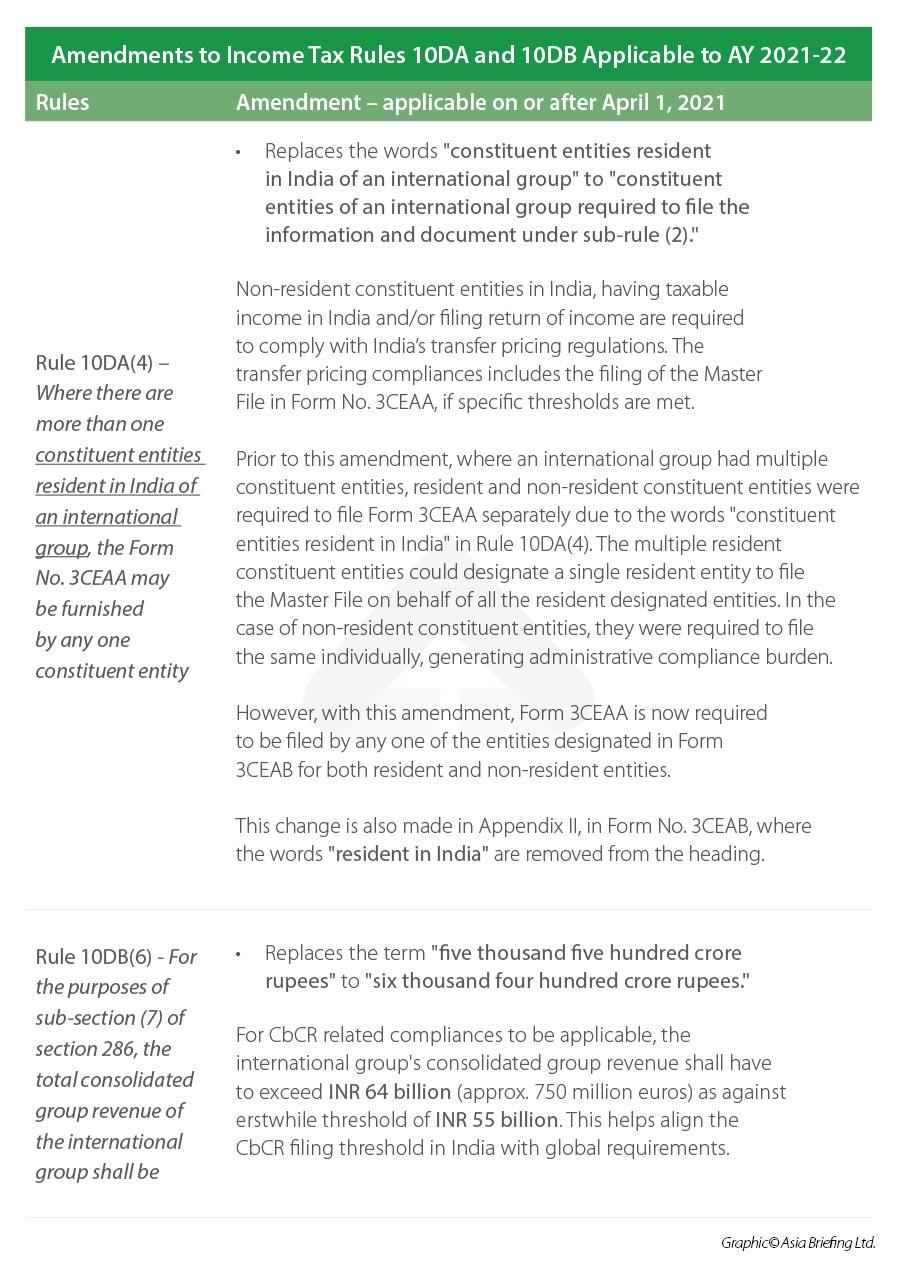