India’s fintech market is the world’s fastest growing – 67 percent of the more than 2,100 fintech entities in operation have been set up in the last five years. Bengaluru and Mumbai are where most fintech companies have their India headquartered – as they are the country’s technology and financial hubs. Last year, 33 new fintech investment deals worth US$647.5 million were closed in the Indian market in the quarter ending June 2020, compared to China’s US$284.9 million. India’s fintech market is now valued at US$31 billion, projected to grow to US$84 billion by 2025. The fintech transaction value size is projected to grow to US$138 billion by 2023 from US$66 billion in 2019.

Hailed as the third largest fintech ecosystem globally, India’s successes lie not only in the establishment of 2,100 new firms, the bulk of which were set up in the last five years.

Total valuation of the industry is estimated at US$50-60 billion. According to a Boston Consulting Group report released March 2021, Indian fintech companies will reach a valuation of US$150-160 billion by 2025, becoming three times more valuable in five years.

A research report by RBSA Advisors stated: “Amid COVID-19, India has seen a 60% increase in fintech investments to US$ 1467 million in H1 2020 compared to the US$ 919 million for the same period last year.”

India’s fintech industry remained attractive despite the pandemic, with the emergence of three new unicorns and five new ‘soonicorns’ (US$500 million+ valuation) since January 2020.

Paytm, a fintech company, is India’s highest valued unicorn at US$ 16 billion and out of 21 unicorns in the country – about one-third are fintech companies.

Driving their growth are India’s numerous start-ups that offer innovative technologies to reduce the asymmetry of information between financial institutions and investors. India’s rapid adoption of digital/online payments, since the demonetisation move in late 2016, has also heavily contributed to the growth of the country’s fintech market.

In 2020, fintech software-as-a-service (SaaS) and InsurTech entities saw total investments of US$145 million and US$215 million, respectively, representing a 4-5x growth over their 2015 funding flow.

Out of India’s 50+ fintech entities with more than US$100 million valuation, there are four wealth and broking fintech enterprises, five InsurTechs, and eight SaaS FinTechs.

Since 2016, the fintech industry has seen cumulative investments into domestic fintech entities worth more than US$10 billion. 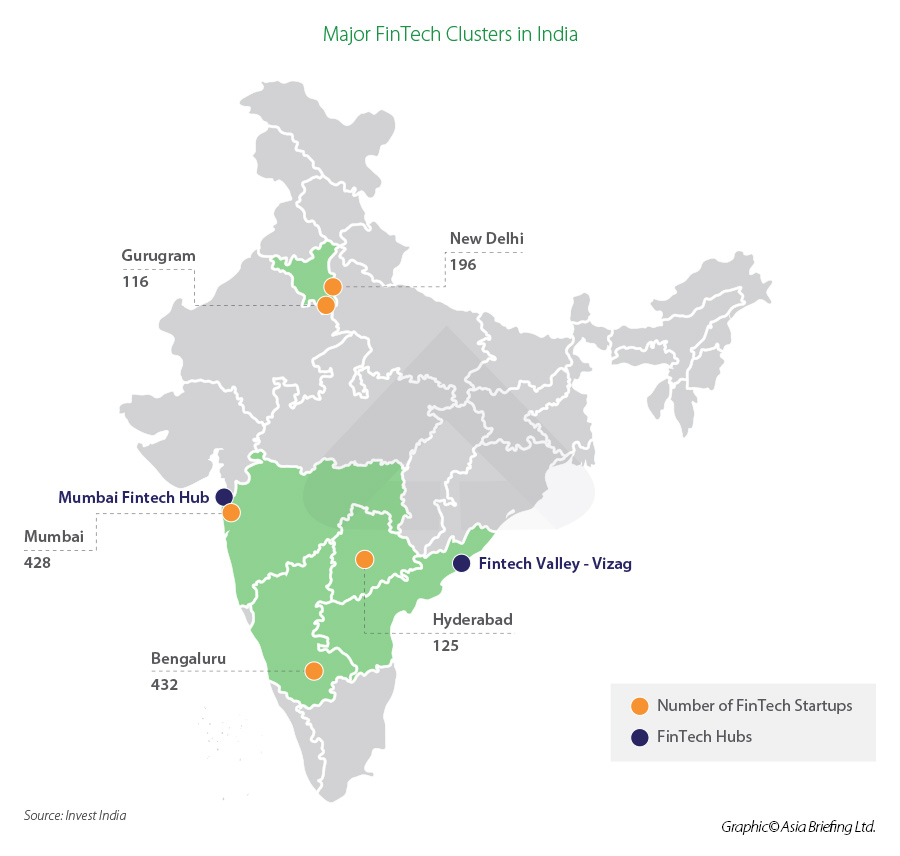 Growth trends in the fintech industry

As other sectors reported losses in 2020, growth in fintech continued, attributed to the increased requirement of accessing financial services digitally due to the government-imposed restriction on physical movement and by extension, a push towards less physical commodity transactions through cash. In 2021, the consumer demand for digital-based services will thrive, especially as outbreaks of the pandemic continue to get forecast.

Major trends in fintech include:

The service platform ‘banking as a service’ (BaaS) connects fintech enablers to banks so that the latter can offer financial services to its customers through a network of fintech developers.

Open banking refers to the practice of banks electronically sharing financial information to third parties by the use of APIs, in an effort to improve services and their security. This process is done with the knowledge and approval of customers. In 2020, the open banking ecosystem began to incorporate non-banking financial companies as well. With the adoption of open banking by banks, such as Kotak Bank and Yes Bank, and increase in the demand for digital financial services, this trend is expected to be popular.

Neo banks traditionally refer to digital banks that have no physical presence, offering digital bank-like services. There are three known types of neo banks –  digital only banks, over the top neo banks, and digital-only brands. Digital only banks require a fully operational banking license, over the top neo banks are standalone digital platforms that offer a variety of products, in partnership with banks and fintech companies, and digital-only brands are banks that have been created by traditional banks for the purpose of focusing on India’s young millennials.

India’s central bank, the Reserve Bank of India (RBI), does not allow digital only banks, but has allowed companies to test any innovations that they may have regarding it.

India’s predominant neo banks include YONO (by State Bank of India), Digibank (by DBS Bank), and Kotak 811 (by Kotak Bank).

While ‘fintech enablers’ provide software solutions to incumbents, ‘distributors’ are fintech firms that dispense specific financial products while ‘full carries’ both develop and distribute their own financial products.

Under the WealthTech space, India has 480+ start-ups segmented in ‘personal financial management’ (Paisabazar, Tarraki, Fintoo, etc.); ‘investment platforms’ (Zerodha, Upwardly, FundsIndia etc); ‘robo-advisors’ (Goalwise, Scripbox, Robocapital etc.); and others (like Screener, Streak, Capitalmind etc.). This industry is also poised for phenomenal growth owing to both rise in high-net income groups looking for specialized advice and on other high middle-income groups looking for low-cost but effective advisory to manage their funds.

Autonomous finance is a method of automating financial decisions, such as paying utility bills, cable subscriptions, and insurance, with the help of new age technologies like artificial intelligence (AI) and machine learning. It is a new fintech solution, expected to be adopted in 2021.

In India, one-eighth of the population still remains unbanked, which is why holistic financial inclusion has been a key factor driving government support for fintech innovation.

Over the years, marquee government initiatives like the unified payments interface (UPI), has aided in centralizing the country’s digital payment landscape. However, obstacles to achieve financial inclusion remain due to the lack of verifiable credit history, lack of documentation, and the unstable income of the underbanked population (such as, self-employed micro-entrepreneurs and blue/grey-collar workers).

Fintech innovations are thus urgently needed and may provide hyperlocal solutions. With the aid of internet penetration and smartphones, it will be possible to collate data on the population and use it to determine the financial status of each household, without having to rely on multiple pieces of tangible documentation.